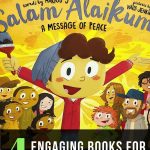 April is also Arab American Heritage Month. While I think it’s super important to include books from diverse cultures and musicians, finding books for this culture was incredibly hard. As far as I could find, there were no books that featured musicians of an Arabic heritage for elementary school. But this doesn’t mean we can’t still include them in our lessons. So for this month, I’ve got four books that I found to highlight Arabic culture and also some listening links for you. Two of the books are appropriate for elementary, the others would fit better in a classroom or school library as they are quite lengthy. (Full disclosure: some affiliate links for the books but it won’t change your price. No pressure!)

Note: All people of Arabic heritage are not Muslim and all Muslims are not of Arabic Heritage.

1. Salam Alaikum: A Message of Peace

Written by Harris J, a British Muslim, this song turned into a book is a beautiful message of peace and illustrations show kindness, helpfulness, and general betterment of the world. While he is not American, this book is a lovely illustration of diversity, and the music video below will DEFINITELY get your students’ attention and he is a modern musician of Arabic heritage. I guarantee this is the most wholesome music video you will see and it totally left a smile on my face.
Fun note: The boy in the illustrations is clearly Harris J as he is wearing the same clothes in the music video.

A gorgeously illustrated book, the character in this book watches her older sister on the first day of her wearing her hijab. While the younger sister faces questions, the older one faces teasing. The younger sister’s perceptions of her sister’s strength and how she looks up to her are a great message for all your students.

This book is for ages 9+ and is 208 pages long, so it would definitely a long commitment to read with your class. However, it is about a Pakistani-American Muslim girl trying to find her own voice. The musical tie in here is that she is in choir and suffers from stage fright. However, the book itself is more about other topics. A local mosque suffers a hate crime attack, and Amina deals with name mispronunciation and thoughts of choosing an alternative for herself. There is family conflict with a visiting family member who may disagree with how her parents are raising Amina and her brother, and there is a school mate who has been unkind to Amina and her Korean friend, Soojin, in the past but has been acting differently toward Soojin as her family prepares for citizenship. This may not work for your class as a book, but it could definitely go into a classroom library if you have one or suggest for your school’s library.

4. Other Words for Home

This book is for ages 10+ and is 341 pages long so like Amina’s Voice, I recommend this for a library setting. Jude and her mother come to America to live with relatives during conflict in her home of Syria. She learns to deal with the label “Middle Eastern”, the noise, and her cousin who feels she is missing part of her culture and is missing some of her roots. She also deals with anti-Muslim sentiments, learning English, and the effects of a terrorist attack in another city. The musical tie in here is that she tries out for the school musical and gets a small part.

BONUS: This video from the Kennedy Center with Simon Shaheen and Qantara explaining how Arabic music works.

Hope this is helpful!