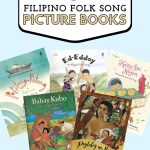 In my hunt for Filipino folk songs, I came across these five illustrated folk song books. I thought they would be wonderful to share with you! Each book also has some info on the song and sometimes more such as the region or music (Kaisa-Isa Niyan). All five books have written out notation for the song.

(Full disclosure: some affiliate links but it won’t change your price. No pressure!) If you chose to shop independent, as always, I urge you to try Tahanan Books which a small publisher that specializes in books about the Philippines and Filipino culture.

Pagtulog na, Nene is a lullaby from Panay Island in the western Visayas in the Philippines. Hiligaynon is a regional language. Nene, is a term of endearment for a younger female, particularly a child.
Folk Song Analysis
3/8: ta, single ti, tam, tie (tam and single ti), single ti rest
Tone set: s,l,t,drmfslt – final tone is do

This is a children’s song about catching river crabs. The song is from Cebu which is an island in the Visayas region of the Philippines. Cebuano is the most common language in this region.
Folk Song Analysis:
2/4: ta, ti-ti, ta-a, single ti, single ti rest, ti-tika, tika-ti, tim-ka
Tone set: s,l,t,drmfs – final tone is do

This song is about blessings of abundance. It is in Kiangan Tuwali, a dialect from the Ifugao region of the Philippines.
Folk Song Analysis
2/4: ta, ti-ti
Tone Set: drms – final tone is do

This one is probably the first song you will see when you look up Filipino Folk Songs. This song is about a family in a nipa hut surrounded by vegetables. It is in Tagalog.
Folk Song Analysis
3/4: ta, ti-ti, ta rest, ta-a, ta-a-a, tam ti
Tone Set: f,s,l,t,drm – Final tone is do

This is a Maguindanaon counting song. It teaches simple rhythms that can be played on the glinting ensemble and the book gives information about the ensemble as well.
Folk Song Analysis
2/4: ta, ti-ti
Tone Set: drm – the final tone is do

I hope this helps you find some new songs for your class!