Three Ways to Prep Your Students for Part Singing 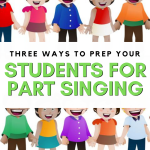 Singing in parts is always a big deal. The first time your students do it, they feel super accomplished! But in reality, part work is something you can do with even your Kindergarten students. Canons and partner songs seem like the obvious answers, but there are ways you can start students before you approach those! Starting partwork activities with young students can make those harmony parts seem a lot less daunting. Here are three ways to prep your students for part singing.

Ostinatos are simple to create and even Kindergarten can be successful with them. Here are a few ways to make them work for you.

Echo work makes students think, can help them practice new solfege correctly, and as an added bonus, help them be able to sing their part while also listening to another. Here are some ways to do echo work.

Singing and using solfege hand signs at the same time is something a lot of us do often. For a challenge, think about your musicianship classes if you’ve taken your Kodaly levels and add this element in to your students singing! If having them try this in canon with themselves seems cruel (maybe…) then try one of these:

I hope that this has given you some great ideas to get started to prep your students for part singing!