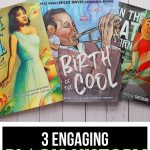 I’ve said it before and I’m very much a person who makes sure that I cover different cultural groups all year and not just in ‘the’ month that is set aside.

But I still think it’s important to cover them in that month.

(Full disclosure: some affiliate links but it won’t change your price. No pressure!)

1. Birth of the Cool: How Miles Davis

A book about the life of Miles Davis. Rhythmic verse titled for his influential album by the same title.

Listening: Birth of the Cool (Full Album) on Youtube. Suggested track: #1 Move. Track 1 is lively and will capture students’ attention.

A cute video about Miles Davis for kids. Talks about Birth of the Cool.

2. When the Beat Was Born: DJ Kool Herc and the Creation of Hip Hop

Listening: Interview with DJ Kool Herc where he talks about how he invented hip hop or the “Merry Go Round”

3. Leontyne Price: Voice of a Century

Listening:
She was a pioneer in the opera realm as the first African American to be featured in a televised opera, to have major role at the Metropolitan Opera and a highly decorated musician across the art world including the Presidential Medal of Freedom, Kennedy Center Honors, National Medal of the Arts and as well as 19 Grammys and a Grammy Lifetime Achievement Award. This was her most well known role.

At the time of publication of this post in 2021, she is still living. This is a performance from 1982.

I hope these 3 Black History Month books for kids give you something to go off of and inspires some meaningful listening in your classroom.

I hope this has been helpful!