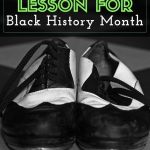 An Engaging lesson for Black History Month doesn’t have to be about struggles. I recently saw a Facebook post where a Black educator was asking people to NOT focus only on the struggles, but also joyful things.

A lesson I’ve done often with my 5th graders not only can bring about a discussion about inequality in early Hollywood, but showcases some of the most influential dancers of all time, the Nicholas Brothers.

Fayard (1914-2006) and Howard (1921-2000) were self-trained by watching some of the most amazing performers of Black vaudeville (including their parents, mom a pianist and dad a percussionist), they combined “classical tap”, jazz, ballet, and acrobatics to create a style all their own. The brothers could sing and act as well although they were not really given the opportunity because of racial restrictions. Their signature move – jump splits and then rising to standing using only the power of their legs. And also things like dancing up walls, acrobatics, and other amazing things.

Their influence on modern dance can’t be denied. Fred Astaire called their Stormy Weather performance the greatest musical sequence of all time. Bob Fosse modeled his first act on theirs. Fayard taught Michael and Janet Jackson as well as Tony winning choreography.

The Nicholas brothers didn’t get to really show their talents because of the color of their skin. According to the interview above from Smithsonian Magazine, some of their best work and one of the only speaking roles they were given was actually cut from a movie because they could out dance Gene Kelly.

THE dance (Jumpin’ Jive from Stormy Weather).
Point of interest: You can talk about “trading fours” with the music and the dancing here too. A great intro to the concept.

I’ve Got a Gal in Kalamazoo from Orchestra Wives. Wait for the wall.

And there are SO many more great clips of them on YouTube. (I know I’ve talked about Chattanooga Choo Choo before…)

The Nicholas Brothers are an amazing duo that we need to give some serious attention to. Not only are they some of the most influential dancers of all time, but they are a wonderful act to highlight if you want to talk about the inequities in Hollywood. The first time I did a lesson about them it wasn’t planned. You know what I mean. When a kid asks a question and you just have to show them something. (Well..this doesn’t really happen anymore, but it did my first few years.)
I showed them a clip and we talked about how they had been dancing since they were little. Their classroom teacher came back to pick them up just as the video was ending, and wonderful woman that she is, she sat down to enjoy the end of it with them instead of rushing them to the door. As they kids were lining up, one of my students commented that they must have made millions.
So our impromptu lesson turned into a conversation about civil rights and what Black performers faced. They got very quiet, and walked out of the room quietly without being asked. After that first time, I always planned the conversation with my students. Highlighting such amazing talent and comparing it with what they faced is always eye opening.

I hope that highlighting the Nicholas Brothers brings joy into your lessons, highlights achievement by Black artists and can be useful for you whether you teach about them in February or August.