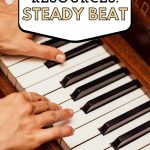 These are some great songs to listen to that have a really solid steady beat. They are great for playing instruments, body percussion or locomotor/non-locomotor music. Some of these are available in Kidzbop versions.

Click the links to find digital folk song files for the different songs. Not all of these are links to my store.

Johnny Works with One Hammer

For this song, I like adding a yelled “one” or “two”, etc at the end of the verse instead of having a rest so there is no question that the beat keeps going.

Snail Snail – this one really drives home the point since the rhythm is the same as the beat in the first measure. Snag this file for free.

Poems and Chants: This is really more than one, but poems and chants that have a natural steady beat are a great resource because they allow the only focus to be the beat. Some great examples are:

I Climbed Up the Apple Tree

Cinderella at the Ball

Chop Chop Chippety Chop – This is not really a Kodaly thing to introduce a song that isn’t in 2/4 or 4/4. However, I think the practical application of having songs that are not in duple is a great idea.

I hope this list gives you some great ideas to teach your students steady beat!