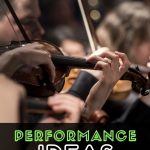 So now that we are looking at our first performance season, I’ve been seeing so many people looking for performance ideas for general music.

I’ve been thinking about this for a while and have been putting together a list of ideas that involve teaching music without singing and performing as well.

When performing or teaching music without singing, you can still do movement, instruments (especially percussion), and stories.

I hope that this sparks ideas. I would love to hear what you are doing! 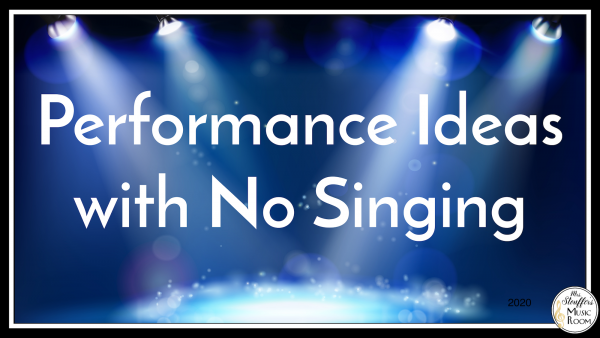 “Move It” style performance to a listening piece.

The idea here is expressive, sometimes rhythmic, movement to a piece of music.

Sometimes you can call attention to form, or use the idea of Laban movements to show different parts of the music.

If you aren’t familiar with Laban, he was a movement theorist, choreographer, and dancer who believed there were 4 parts to movement each with two elements.

You can read more about it here.

This can be a project you put together with the kids or create yourself. You can also use some of the John Feierabend Move It videos that can be found anywhere.  (Who needs more work these days?)

If you can adapt folk dances so kids don’t have to touch, this might be an awesome performance idea. Check out my blog post on adapting movement here.

Visuals
Any visual will make this a little more exciting, but paper plates, scarves, streamers, glow sticks, or even art the kids make themselves will be great!

Hand Dance
When I first started teaching I was NOT a fan of movement, but mostly because my only experience had been movement just for the sake of having it.

I had made a goal for myself to use movement with my elementary kids at my Montessori (about 15 grades 1-5, mostly 1st and 2nd graders) in a meaningful way.

So they created a hand dance for “Yellow Submarine”, and the kids wore all black with white gloves. We hooked up several black lights and the art teacher helped them create “sea creatures” and huge Yellow submarine.

The kids created several movements for their hands to go with the music, “pulled” in the sub with a hand over hand motion like a rope. Some of the kids moved the sub and the others moved their fish.

This was the first time we had done any movement, and for the kids it was a great way to let go. For me, I was able to incorporate appropriate motions for 1st through 5th graders, and not have my few older kids feel like they were on display.

The only thing the audience saw was the sub, the sea creatures and their hands. Very little pressure if someone messes up because no one would know who it was. I still think this was one of the best things I’ve done and I’d do it again in a heartbeat.

The great thing is that this would work for ANY song the kids can ‘act out’.

My friend Joan showed Michigan Kodaly this awesome play along she created for The Nutcracker March at a chapter share a few years ago.

She used plastic table clothes to create cute little streamers for some kids to use (in red and green) but I have used scarves in the past.

She used woodblocks to keep the beat, switch to jingle bells on the B phrase, and then ended each section with a triangle.

The streamers/scarves are for the actual B section. No singing, shows form, steady beat and it’s visually fun. My 1st graders were taught each part and then were able to trade instruments/scarves so everyone could do each part.

These would be easy to do for a recording of patriotic music, holiday/winter music, or even for a piece of listening music.

Instead of singing, play the melodic line on a piano or other instrument to give guidance for the piece.

Body percussion is a hoot and the kids love it. There are lots of play alongs on YouTube, they could create their own or create one to pieces that align with what you were planning for a concert.

Stomp style percussion. This could be great for older kids in particular. Let them experiment with found sounds, percussion they used while they were distance learning in the spring or a similar idea and let them each create patterns that lie together to create a piece of music.

Bucket drumming – compose your own ostinatos to piece together or play to a piece of music.

NOTE: With the composition element, I’m not always suggesting big compositions. Think about Bobby McFerrin and how he layers several small elements that go in and out to create a piece of music.

This could work very well with any of these options as well as the following.

Essentially, music to accompany the story.

This is a great place to use a book or a folk tale.

Use barred instruments, percussion, or anything else to accompany the story, highlight characters, or key points, and enhance the story.

Students can create the sounds, movements or anything they chose to represent each part.

You can also incorporate some movement elements if desired such as a small ‘dance’ to represent a character.

Teacher Tips For Performing And Teaching Music Without Singing

I hope that these performing and teaching music without singing ideas have been helpful and sparked some ideas for you!